Here’s everything that happened at Coachella weekend two

Also, read our day one, day two, and day three re-caps from Coachella weekend one.

Kanye West may have pulled out of his Coachella headling slot earlier this year, but that didn’t stop him from making a grand appearance at Coachella’s weekend two. The outspoken producer-turned-rapper took to a giant hill on the Coachella grounds early Sunday morning to deliver a “sermon on the mount” type of performance. The surprise set drew parallels between Yesus and Jesus, causing a media firestorm that called the performance profane and sacrilegious.

West performed many of his past hits, “Jesus Walks,” “Fade,” and “All Falls Down,” before announcing a new single, titled “Water.” It was a low-key song with spiritually themed lyrics and a gentle rhythm revolving around the chorus “We are water.” The song closed with some guest verses from Chance the Rapper on “Ultralight Beam.”

Of course, many VIPs were in attendance, including the Kardashians, Justin and Hailey Bieber, Chance the Rapper, Teyana Taylor, Ty Dolla $ign, DMX and Kid Cudi.

this moment with kanye, cudi, chance and DMX really got me 😩 #SundayService #coachella pic.twitter.com/uSExFWvfzw

Kanye West wasn’t the only special guest Cudi brought out during the set. Ty Dolla $ign and 070 Shake also made appearances during his set.

Tame Impala made their fourth Coachella appearance this year, although it was their first as a headliner. The Australian psych-rock unit brought out A$AP Rocky as they ran through his song “Sundress,” which samples the Tame Impala song “Why Won’t You Make Up Your Mind?” Then they delivered a live cut of “LSD,” the hit single from Rocky’s 2015 album, At.Long.Last.A$AP. 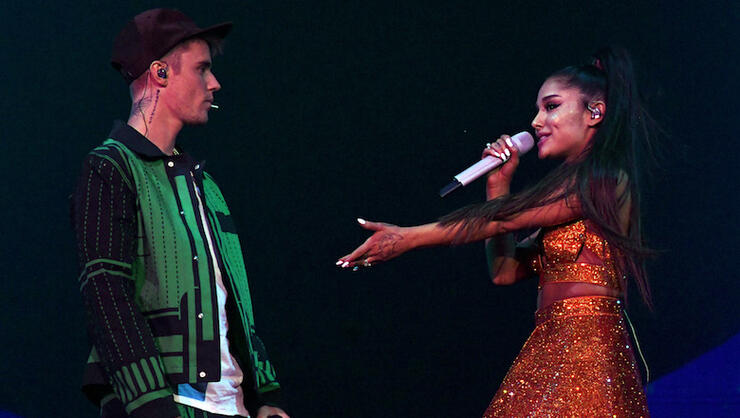 This past weekend, Ariana Grande had an Easter treat for fans with Justin Bieber joining her on stage to close out her headlining Coachella performance. However, Bieber’s on-stage surprise was not planned at all. Ariana told the crowd: “I wasn’t going to bring out any guests tonight, but my friend Justin Bieber came all the way out.”

The two performed a duet for Bieber’s hit single, “Sorry,” marking Beiber’s first performance in over two years. Earlier this year, Bieber said he would be taking a break from the music industry to work on some “deep rooted issues.” After finishing the performance, Justin told the crowd that he had a new album in the works that would be coming very soon.

Notably, during Grande’s performance, some disgruntled fan threw a lemon at her as she made her way up the catwalk. While Ariana did address this to the crowd, it was no doubt a low blow as well as a no-so-subtle Beyoncé reference. Considering Beyoncé’s two-year old album, Lemonade, was made available on Spotify and Apple Music the same day, the connection becomes obvious. When life gives you lemons, ey?

ARIANA SWEETIE IM SO SORRY ABOUT THAT LEMON BUT… I CANT BELIEVE CHRIS AND I SAW THIS RIGHT IN FRONT OF US JSKSJW pic.twitter.com/SoJvdEwQjn

This past Saturday, April 20, marked the one-year anniversary of Avicii’s sudden and tragic passing. As countless artists took to social media over the weekend to voice their grief in remembrance of Tim Bergling, Gryffin paid homage with a beautiful live tribute of Avicii’s 2013 hit, “Wake Me Up.” Not only that, he brought out the lead vocalist on the single, Aloe Blacc, to help him honor Avicii’s memory.

Gryffin and Aloe Blacc recently teamed up on the forthcoming track, “Hurt People,” so it was only fitting that they’d do something together for weekend two of Coachella. In the video, Gryffin can be seen playing live acoustic guitar with Blacc providing his signature vocals.