In 2013, Illenium was a no-name producer filling the opening slot for Above & Beyond’s Halloween stop at Denver’s The Fillmore Auditorium. As the first act after doors, he had less than twenty people in the crowd. Granted, this was a time when Nick Miller was still getting used to calling himself a Rocky Mountain resident and playing free shows just to get his name around town.

It was also a time when the newly-uprooted San Fransisco native had only just released his remix of Oh Wonder’s “Shark,” with an early discography which consisted of one-off releases like “So Wrong” and “Make Me Do.” All the while, Miller was working with his close friend Said The Sky on plenty of bedroom collaborations and buddying up to artist collectives like Patheon, Hegemon, and Artist Intelligence Agency to get his music out.

Most recently, Illenium’s third studio album, Ascend, reached No. 1 on Billboard‘s Top Dance/Electronic Albums Chart with the LP’s Jon Bellion-assisted record earning RIAA gold. Along with these accolades, Miller comes to the latter end of his Ascend arena tour, which boasts a full live band with Said The Sky on keys, Dabin on strings, and Day on percussion. Conscious Electronic had the pleasure of attending Illenium’s Red Rocks and Dallas stops. While some aspects were very much the same from stop to stop, such as setlist and lighting design, others were incredibly original and off-the-cuff, like the opening acts and Illenium’s evolving visual plotlines.

Beyond a shadow of a doubt, the Ascend tour marks Illenium’s career-high point. Nevermind the stellar technical production or the insane energy of his adoring Illenial fanbase, many of whom traveled far and wide to witness the spectacle. Nevermind the spot-on performances from Illenium and his talented cohort of bandmates, openers, and collaborators. Nevermind the electrifying pyrotechnics, breathtaking laser show, towering LED backdrops, and storyline visuals. Illenium’s Ascend tour not only showcases his intense yearning for collaboration on many fronts, but it also spotlights the burgeoning movement that Miller has built around his sound and message.

As someone who has seen Illenium along his full ascent, which is nearing pop-crossover stardom, what Miller has been able to accomplish in a mere matter of five years is nothing short of astounding. His Ascend tour is a living testament to that fact. Rather than talk about all of the amazing live elements of the tour, we’ve narrowed it down to a few highlights for those who weren’t able to attend this time around.

After all, Illenium is known for drawing out his album tours beyond the initial phase one announcement, as evidenced by his previous Awake tour. Indeed, he’s already announced a slew of added hometown throwdown dates in Northern California. Without further ado, here are the top five moments that defined Illenium’s Ascend tour.

One particular surprise to many fans along the Ascend tour was when Illenium began to play the guitar live. Perched atop his stage risers, it was a new skill not yet seen in his live performance. Fans knew Miller was gifted at the keys and drum pads, as witnessed from his previous years, but the new instrument addition fostered shock, awe, and immense respect amongst Illenium’s crowd. Later, Illenium would return at different points in the set to play along with his band.

2) Ekali comes out to play their unreleased collab live.

Among the select stops in which Ekali directly opened for Illenium, there was one undeniable moment that made for a definite tour highlight: When Illenium brought out Ekali at the climactic point in his headlining set. The two had previously debuted their high-profile collaboration, “Hard To Say Goodbye,” while at EDC Las Vegas. The song wasn’t released until late November, which made for the perfect unreleased track to play out for fans along tour. When Illenium introduced Ekali onto the stage, the crowd roared. Phones shot straight up into record mode as vocalist Chloe Angelides also joined in with her serene vocals. With the full band at their side, the moment created an intense air of collaboration and, not to mention, pure feels.

3) Dabin smashes his guitar for an all-out rock/metal vibe.

Arguably one of the most memorable moments on the Ascend tour occurred when Dabin came front-and-center to smash one of his electric guitars to smithereens. While it fostered cheers and laughter in some, drawing forth direct parallels to the hard rock and heavy metal bands of yesteryear, for others the move was scoffed at. This vocal minority rose up over social media to voice their concerns and aggravations. So much so that Illenium decided to turn those outraged comments into a meme. 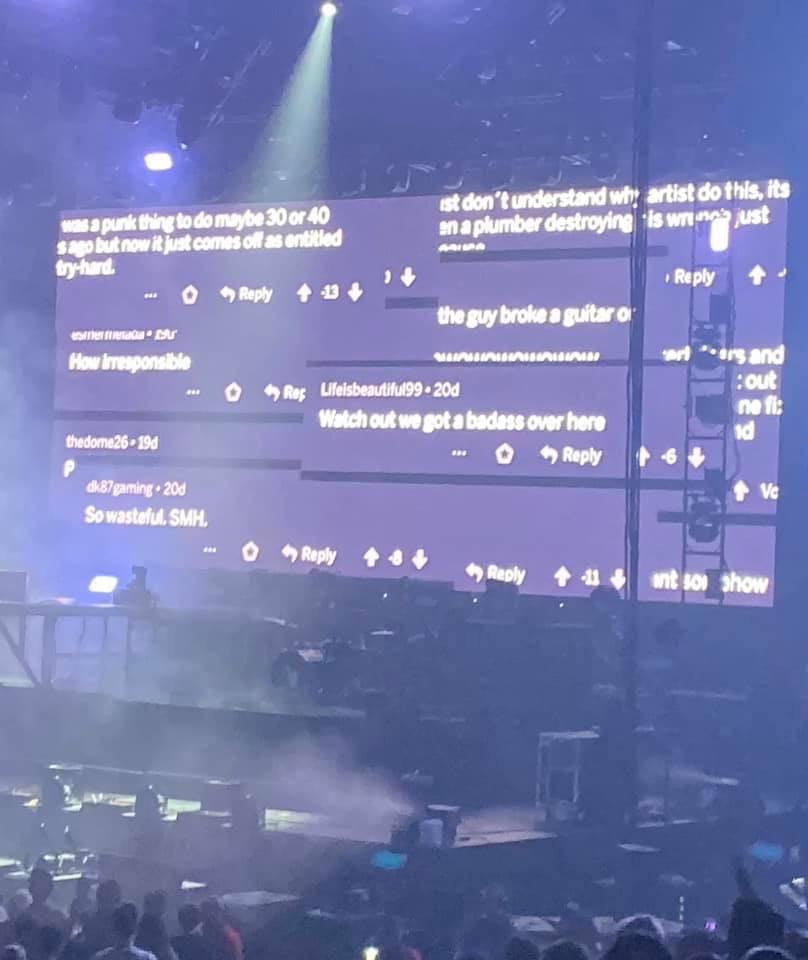 At Illenium’s STAPLES show in Los Angeles, the comments were all displayed across the main LED screen while “Throwin Elbows” was playing — the part in the set during which Dabin typically smashes his guitar.

Instead, a slew of these social media comments was flashed across the screen: “What a punk thing to do,” “maybe 30 or 40 years ago,” “comes off as entitled try-hard,” etc.

In any case, the display made for one memorable moment.

The fourth standout moment along Illenium’s Ascend tour belongs to the moment when he brought out his long-time best friend and most frequent collaborator, Trevor Christiansen, aka Said The Sky. Keep in mind, this is a guy whose been at Illenium’s side since the days when he was enrolled in UC Boulder’s music-business program. When Miller dropped out due to working on his EP in 2013, Christiansen was there every step of the way. The two used to play back-to-back sets so frequently in Denver that Illenium’s management had to step in and tell him to distance himself creatively from Said The Sky.

Yet, when Illenium brought out his lifetime pal onto the stage, the moment brought back intense nostalgia for the pair’s beginning days in the Denver scene. Smiles were traded, an air of pride filled the air, and the two showed off their amazing chemistry. It’s a moment that will be remembered for years to come, especially given how Said The Sky is leaving the Illenium Live act next year to pursue his own burgeoning solo music career.

The live band experience is really the bread and butter of the Ascend tour because most fans saw how the band was formed so naturally over the course of two years. As four friends living and working in the Denver music industry, how this group of musicians came together was in the true spirit of collaboration. They’ve all played Coachella together, tried out different bandmates together (remember KJ Sakwa was on drums?), and traveled the entire country together.

For Said the Sky, Dabin, and Day, Illenium has undoubtedly given them the platform to become household names—at least in the dance music world. Indeed, it’s how Dab The Sky originally came to be and now the pair is being booked as a highly in-demand back-to-back set. It’s a duo that Illenium fans will always make a point to come see, too.

Given how Dabin and Said The Sky are leaving next year to pursue their own careers, seeing them all on stage during the Ascend tour was as bittersweet as it was heartwarming. These are bandmates who clearly know one another, love sharing the spotlight together, and can anticipate each other’s moves at every step.

Writing as both a music critic and friend of Illenium, I could sit here all day and talk about how Miller has gone from a no-nothing producer/DJ to full-on rock band frontman and main stage headliner. However, that is a fact that goes without saying. What Illenium has been able to do is cultivate a movement for lovers, for friends, for sad boys and screaming girls alike. Ascend is just the next step in his artistic evolution, albeit not one that will soon be forgotten.

Catch Illenium this month as he returns to his original stomping grounds, December 12-14. Two of his appearances even feature a throwback set, in which Illenium will dig deep into his early catalog to feature the more dubstep-driven tracks. Tickets Sacramento and San Fransisco are still available on his website.